The Word in Flesh 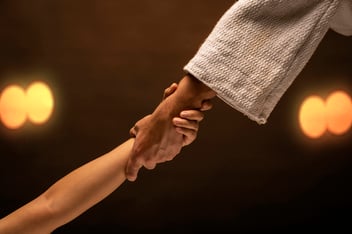 The Word in Flesh

In Matthew 16:13-15, we read about a scene where Jesus was asking his disciples, “Who do people say the Son of Man is?” They replied, “Some say John the Baptist; others say Elijah; and still others, Jeremiah or one of the prophets.” “But what about you?” he asked. “Who do you say I am?”

What if Jesus asked you the same question today? In other words, who do you say that He is?

At Christmastime, this question seems even more significant. Most people have some idea about the religious significance of the holiday (or they’ve at least heard someone stress the need to Keep Christ in Christmas). But what do they actually believe about this baby we are celebrating?

Was Jesus a real person who walked on this earth? Or was he just a fictional creation?

According to a Barna study, “More than nine out of 10 adults say Jesus Christ was a real person who actually lived (92%).”

The Barna study followed up by asking about who people thought Jesus was. The results were more complicated. They found, “Most adults—not quite six in 10—believe Jesus was God (56%), while about one-quarter say he was only a religious or spiritual leader like Mohammed or the Buddha (26%). The remaining one in six say they aren’t sure whether Jesus was divine (18%).”

A similar study completed by the Church of England found “four in 10 people did not believe Jesus was a real person, with a quarter of 18 to 34 year olds believing he was a mythical or fictional character.”

Again, the question arises: Who do YOU say that He is?

The famous English novel writer of The Time Machine and War of The Worlds, H. G. Wells, was once quoted, saying, “I am a historian, I am not a believer, but I must confess as a historian that this penniless preacher from Nazareth is irrevocably the very center of history. Jesus Christ is easily the most dominant figure in all history.”

Who was this baby boy in a manger that we spend so much time talking about around this time of year? Why is this Jewish carpenter from Nazareth so special? What made this teacher of the law such a central and influential historical figure?

In the weeks leading up to Christmas, we will spend time rediscovering the most famous man in history.

The goal of this blog series is to help you recognize the fullness of the person of Jesus Christ, to point out unique roles that he plays in the span of history, and to lead you into greater worship and appreciation of him.

Why Your Answer Matters

It is my understanding that this is the most important question you will ever answer in your life – Who do you say that He is?

This is because defining who Jesus actually is will help in determining who you are. It is core to understanding your life, your world, your purpose.

Furthermore, your perception of Jesus, and how you see yourself and the world around you in light of that, sets a foundation for answering and resolving many of life’s greatest questions.

Jesus, the good teacher, won’t change your life. At least, not in any lasting way. Jesus isn’t just your shrink, or a motivational speaker meant to fix arbitrary issues.

Jesus, the nice guy, won’t change your community. Jesus showed tremendous compassion and kindness, but Jesus being reduced to someone giving out free bottles of water isn’t going to make a whole lot of difference in your local community or in your personal relationships.

Jesus, the political figure, won’t change your world. Jesus isn’t interested in being a politician. Jesus is so much bigger than a political party and he’s building a Kingdom that’s greater than any nation on this earth.

The impact of Abraham Lincoln, Adolf Hitler, and Elon Musk combined have not made an impression in society in the way that Jesus of Nazareth has. Jesus, then, must be more than a good teacher or a nice guy.

Lessening Jesus to be only a small portion of who he actually is isn’t helpful, nor is misrepresenting him altogether. You must understand Jesus in his fullness and in a truthful and accurate way.

Jesus is the Promised Prophet

The Lord your God will raise up for you a prophet like me from among you, from your fellow Israelites. You must listen to him. For this is what you asked of the Lord your God at Horeb on the day of the assembly when you said, “Let us not hear the voice of the Lord our God nor see this great fire anymore, or we will die.”

The Lord said to me: “What they say is good. I will raise up for them a prophet like you from among their fellow Israelites, and I will put my words in his mouth. He will tell them everything I command him. I myself will call to account anyone who does not listen to my words that the prophet speaks in my name. – Deuteronomy 18:15-19

In the above passage, Moses speaks of a greater prophet coming who will be a lot like himself, someone who will come and stand between God and the people and declare God’s word to his people.

Moses states that there is a prophet coming from within Israel and he will declare the word of the Lord over the people, and they must listen to him.

Who is this great prophet that is to come? Jesus!

Jesus served as prophet by speaking God’s word to the people and being God’s Word for the people.

One of the most miraculous things about the Christmas story is seeing how the birth of Jesus was the fulfillment of many Old Testament prophecies. Not only was his birth prophesied, but so was his ministry, his death, and his resurrection.

As Jesus began his ministry, He stepped into the role of eternal prophet as was prophesied.

In the past God spoke to our ancestors through the prophets at many times and in various ways, but in these last days he has spoken to us by his Son, whom he appointed heir of all things, and through whom also he made the universe.                  – Hebrews 1:1-2

The scripture says God has spoken to us by/via/in the way of his Son. Jesus has stepped in and forever fulfilled the Old Testament office of prophet, serving between God and the people, and speaking on behalf of God.

At the beginning of his ministry, Jesus arrives in Nazareth, his hometown.

He went to the synagogue on the Sabbath day, and during service, he stands up and he pulls out a scroll. This is a scroll of the prophet Isaiah. This is considered very sacred for the people in the room. He reads a portion directly from what we know as Isaiah 61.

He went to Nazareth, where he had been brought up, and on the Sabbath day he went into the synagogue, as was his custom. He stood up to read, and the scroll of the prophet Isaiah was handed to him. Unrolling it, he found the place where it is written:

“The Spirit of the Lord is on me,

because he has anointed me

to proclaim good news to the poor.

He has sent me to proclaim freedom for the prisoners

and recovery of sight for the blind,

to set the oppressed free,

to proclaim the year of the Lord’s favor.”

Then he rolled up the scroll, gave it back to the attendant and sat down. The eyes of everyone in the synagogue were fastened on him. He began by saying to them, “Today this scripture is fulfilled in your hearing.” – Luke 4:16-21

He essentially tells those present, “while you thought this scripture was about Isaiah, it’s actually about me - I am the prophet God sent.”

The Word became flesh and made his dwelling among us. We have seen his glory, the glory of the one and only Son, who came from the Father, full of grace and truth.        – John 1:14

Jesus isn’t simply speaking the word of God to us, but he is being the Word of God for us. Being the Word, He is the very revelation of who God is.

The Word of God, Jesus Christ, existed for all time with God, as God.

What’s so special about that?

Jesus showed up as the Promised Prophet, speaking the word and being the Word, and he arrived with good news. Jesus the Christ is the anointed one. The poor are made rich. The captives are set free. The blind can see. The oppressed are delivered. God’s favor, his unmerited grace is given to us freely in Christ.