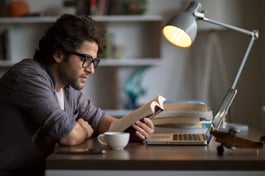 Criticism is almost inevitable if you’re doing God’s work in a rotten world. No matter how hard you work to serve God and others well, somebody’s going to complain. I know, because I’ve been the recipient of that criticism. My general approach to criticism, though, is to first give the complainer the benefit of the doubt—and then deal with the critique. Here’s why I start with the benefit of the doubt:

Thank you to our guest author, Chuck Lawless. Chuck Lawless is Dean of Doctoral Studies and Vice-President of Spiritual Formation and Ministry Centers at Southeastern Seminary in Wake Forest, NC, where he also serves as Professor of Evangelism and Missions. In addition, he is Team Leader for Theological Education Strategists for the International Mission Board of the Southern Baptist Convention. Check out Chuck's blog here.