Top 20 Most Frequently Asked Bible Questions: What Does the Bible Say About Divorce and Remarriage? 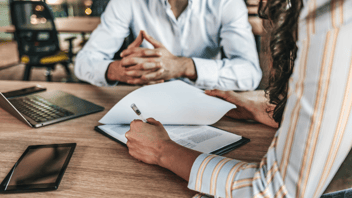 What Does the Bible Say About Divorce and Remarriage?

No one walks down the aisle with the plan to divorce in the future.

On their wedding day, couples vow to take each other “for better, for worse, for richer, for poorer, in sickness and in health, to love and to cherish, till death do us part, according to God's holy ordinance.”

In the moment, they take those vows seriously.

But at some point, after they say, “I do,” they realize marriage is hard and takes work, and many couples wind up divorced.

According to the American Psychological Association, “About 40 to 50 percent of married couples in the United States divorce.”

Even worse – divorce rates spiked during the COVID-19 pandemic.

A study by Legal Templates found, “Interest in separation during quarantine peaked on April 13 — a 57% increase compared to Feb 13, 2020. That’s just 15-20 days into when the vast majority of states began official quarantines.”

The rising numbers are heartbreaking and alarming.

Whether you are a child of divorce, happily married, separated, or divorced, it is wise to know what the Bible says about divorce and remarriage.

Divorce is Not God’s Desire

“For I hate divorce!” says the Lord, the God of Israel. “To divorce your wife is to overwhelm her with cruelty,” says the Lord of Heaven’s Armies. “So guard your heart; do not be unfaithful to your wife.” – Malachi 2:16

There is no way to sugarcoat it – God hates divorce. The Bible makes that clear.

Not only does the Bible explain that two become one when they are married, but they should not be separated.

God loves us and does not want us to experience the hurt of divorce and separation.

So they are no longer two but one flesh. What therefore God has joined together, let not man separate.”
– Matthew 19:6

He said to them, “Because of your hardness of heart Moses allowed you to divorce your wives, but from the beginning it was not so.” – Matthew 19:8

God knows we are sinful.

As sinful people, divorces will happen.

That’s why Jesus told the Pharisees that Moses allowed for divorce but noted that if someone remarries, he (or she) commits adultery.

However, as Jesus explains in the passage, this exception for divorce only applies when sexual immorality is involved.

But I say to you that everyone who divorces his wife, except on the ground of sexual immorality, makes her commit adultery, and whoever marries a divorced woman commits adultery. – Matthew 5:32

Additionally, Paul writes about believers and nonbelievers divorcing in 1 Corinthians 7.

In this passage, he explains that if a nonbeliever chooses to leave a believer, they can be divorced.

But if the husband or wife who isn’t a believer insists on leaving, let them go. In such cases, the believing husband or wife is no longer bound to the other, for God has called you to live in peace.  – 1 Corinthians 7:15

The Bible Describes When Remarriage is Allowed

And I say to you: whoever divorces his wife, except for sexual immorality, and marries another, commits adultery. – Matthew 19:9

The Bible does provide exceptions for when divorce is allowed (sexual immortality and nonbelieving spouses), but it also provides exceptions for remarriage.

For instance, many people use the above verse to claim remarriage is a form of adultery. This is true, but only to an extent.

Got Questions explains, “The phrase ‘and marries another’ (Matthew 19:9) indicates that divorce and remarriage are allowed in an instance of the exception clause, whatever it is interpreted to be. It is important to note that only the innocent party is allowed to remarry. Although not stated in the text, it would seem the allowance for remarriage after divorce is God’s mercy for the one who was sinned against, not for the one who committed the sexual immorality.”

The Bible Does Not Require Divorce

The Gospel Coalition explains, “The Bible does not command divorce – it permits, regulates and limits divorce. The Bible allows divorce – in certain situations – because of the hardness of human hearts.”

It is also important to understand that while there are two exception clauses for divorces in the Bible (sexual immorality and nonbelieving spouses), the Bible does not require divorce in these cases. They are exceptions – not rules.

For instance, many Christian couples stay together after an affair through prayer and counseling.

Similarly, there are many instances where a Christian spouse stays married to a nonbeliever.

You are Not Loved Any Less by God

Before we end, it is hugely important for you to understand that divorce does not make anyone less loved by God.

Divorcees are children of God, and He weeps alongside them as they walk this hard road.

The Bible also has story after story of men and women who sinned and were redeemed.

For example, a prostitute named Rahab, an adulterous couple (David and Bathsheba), and a widow who remarried (Ruth) are all part of the lineage of Jesus Christ.

His grace and mercy are available to all, including you!