The Door of Evil: Dealing With Temptation 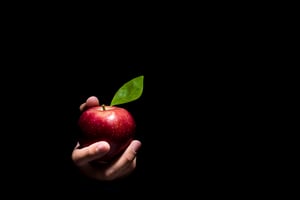 At some point in our lives, we’ve all heard someone say, “Don’t tempt me!”

Church attenders have likely heard people confess to “giving into temptation,” and we’ve all been tempted by someone or something.

Have you ever given much thought to the difference between sin and temptation? Kevin DeYoung of The Gospel Coalition writes, “Temptation is not the same as sin. … Just because you are struggling with temptation does not mean you are mired in sin. The spiritual progression in the human heart goes from desire to temptation to sin to death.”

All deal with temptation. Even Jesus was tempted.

The difference is Jesus never gave into temptation and sinned.

Let’s spend some time today talking about how you and I can deal with temptation.

“But each person is tempted when they are dragged away by their own evil desire and enticed. Then, after desire has conceived, it gives birth to sin; and sin, when it is full-grown, gives birth to death.”
– James 1:14-15

Cambridge Dictionary defines temptation as “the desire to have or do something, esp. something wrong, or something that causes this desire.” What a great definition!

We want to do something even though we know it is wrong and bad for us.

We know doing it will cause guilt and regret, but the pull is so strong. We wrestle with it – until we talk ourselves into the sin.

Lead Me Not into Temptation

“And lead us not into temptation, but deliver us from the evil one.”
– Matthew 6:13

Since temptation is a reality for all, what can we do?

First, we can pray. In the Lord’s Prayer, Jesus taught the disciples to pray to be delivered from temptation. Prayer is the best place to begin.

Know What Tempts You

Temptation can sometimes sneak up on you.

More times than not, however, we see it coming.

For example, Alcoholics Anonymous discourages its members from going to bars. They rightly believe it would be far too difficult to turn down the temptation to drink alcohol in this setting.

To deal with temptation, it is wise to self-evaluate. Be honest with yourself about yourself. What things tempt you? What do you need to avoid?

As Leah Baugh writes for Core Christianity, “It may seem odd, but we must make a study of ourselves. Personality, circumstances, disposition, and life experiences are all factors that can make us more susceptible to certain kinds of temptations. How can we be on guard for something unless we know what we are looking for?”

Do Not Go Near the Door

In Proverbs 5, the wise lesson focuses on avoiding the tempting of the adulterous woman.

We are not instructed to avoid committing adultery; instead, we’re told to keep on path far from the woman. In fact, we should not even go near the door of her house.

Like alcoholics are told to avoid the doors of a bar, what doors should you avoid in your life?

I love this advice from Dr. Charles Stanley of In Touch Ministries for dealing with temptation – “HALT. Never let yourself get too Hungry, Angry, Lonely, or Tired.”

When we feel any of these four things, we are more likely to give in to temptation and sin.

It’s in these moments when the diet is dismissed, when revenge is taken, when adultery is committed, and when we act foolishly.

God Always Provides a Way Out

“No temptation has overtaken you except what is common to mankind. And God is faithful; he will not let you be tempted beyond what you can bear. But when you are tempted, he will also provide a way out so that you can endure it.”
– 1 Corinthians 10:13

Finally, it is crucial for those who follow Jesus to know and believe that God will always provide a way out of temptation.

The Apostle Paul reminds us, “God will not let you be tempted beyond what you can bear.”

Pray, memorize Scripture, and find someone to hold you accountable at your church home.

Rather than trying (and failing) to deal with temptation in the heat of the moment, make it your aim not just to avoid temptation but to avoid even the door that leads to it.

Then, take active steps to make sure you avoid these doors, such as avoiding bars, certain friends who encourage sinful behaviors, closed rooms with members of the opposite sex, etc.