Summer in the Psalms: Psalms 3 - How to Deal with Catastrophic Problems 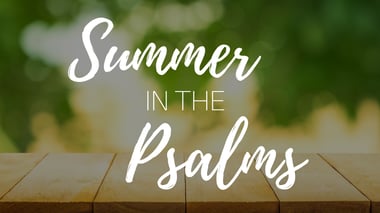 In life, we will have troubles. Unfortunately, some will be catastrophic. It is effortless to focus on the catastrophe rather than focusing on God. However, as any believer who has been there can tell you, focusing on the problem rather than looking to God does not solve anything. It makes the problem seem more significant than it already is.

Think about it. The last time you faced a crisis, what was your first instinct? Did you start to freak out? Did you question God? Did you sink into self-pity and become despondent? Or, did you turn to the Lord in prayer? While this may seem like something that is easier said than done, we can look to the heroes of our faith to see how they faced trials and catastrophes.

What King David Did Instead

King David dealt with his fair share of problems while on Earth, but he found relief by turning to God. Let’s look at some examples. In the book of 2 Samuel, we learn about the devastating conspiracy against David by his son, Absalom. Absalom wanted power – and he wanted to take it from his father.

By conspiring against him and his armies, Absalom put David into what surely looked like a catastrophic situation. However, the way the father and son handled the conspiracy gives us an idea of why David wrote many of the Psalms – including Psalm 3, which we will discuss today.

Psalm 3 is a Prayer

Psalm 3 was David’s prayer to God when he fled from his son, Absalom. Considering what we know about this catastrophic problem, it helps us understand David’s prayer. In particular, Psalm 3 applies to David’s life at this moment, but it also applies to the nation of Israel, as well as the people of God today.

In this world, we will have trouble; however, our faith should overcome our fears. As Warren W. Wiersbe says, “Fear and faith cannot live in the same heart.” Let’s look closely at Psalm 3 to see how it was applicable to David’s life and how it applies to our own.

The Trials of David

Psalm 3:1-2 identify the trial David is facing. He comes to the Lord in prayer regarding the many foes that are against him, and he tells God that many are doubting God will deliver him. Have you ever faced a time when others were against you? Have you ever had someone tell you that God wouldn’t help you? Or, have you merely gone through a battle and thought these thoughts yourself?

Let’s face it – bad things are going to happen, but how you respond to these types of devastating situations makes a huge difference.

The Confidence of David

In verses 3-4, David acknowledges where he places his faith and confidence.

“But you, Lord, are a shield around me, my glory, the One who lifts my head high. I call out to the Lord, and he answers me from his holy mountain (Psalm 3:3-4).”

In these verses, David proclaims that God is his shield, his strength, and his provider. Even when facing this catastrophic problem as his son and an enormous army heads in his direction, David’s faith in “the One who lifts my head high” sustains him and prepares him for the battle. David understood that this shield of faith could even protect us from the flames of the evil one (Ephesians 6:16)!

Plus, David is not only saying God gives us his shield and strength for battle but also reminds God that he is placing his faith in Him and will listen for His answer. Far too often, we forget that we can call out to the Lord and He will hear us and act on our behalf. Instead, we panic, or we react negatively (or sinfully) in the heat of the moment; whereas, David’s faith in the Lord prevented him from panicking.

Faith is the refusal to panic!
-- Martyn Lloyd-James

The Peace of God

The last verses of Psalm 3 describe the peace of God David feels even in the midst of this catastrophe. It is unexplainable, but it is a blessing to those who believe and put their faith in God alone. David writes, “I lie down and sleep; I wake again, because the Lord sustains me. I will not fear though tens of thousands assail me on every side (Psalm 3:5-6).”

Have you experienced this type of spiritual peace? When we put our faith in God, we can rest knowing the Lord will sustain us even when we are dealing with life’s most troubling circumstances.

“God cannot give us happiness and peace apart from himself,
because it is not there. There is no such thing.”
-- C. S. Lewis

David ends this prayer by calling out to the Lord for deliverance. As a believer, David trusted the Lord to deliver him from his enemies. As Christians, we should have this same faith. Isaiah 54:17 says, “No weapon forged against you will prevail, and you will refute every tongue that accuses you. This is the heritage of the servants of the Lord, and this is their vindication from me,’ declares the Lord.”

The next time you face a situation beyond your control, remember who made you, to whom you belong, and who has promised to deliver you. When you feel like you’ve lost all hope, look up!