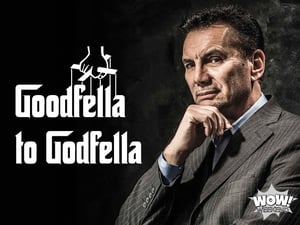 For most of us, films like The Godfather, the Sopranos, and Goodfellas seem like fiction. But, for men like Michael Franzese, these shows hit close to home because they resemble the mafia world he grew up in and eventually joined.

Not only did he follow in his father’s footsteps, but he also took the lead, becoming “one of the biggest earners the mob has seen since Al Capone and the youngest individual in Fortune magazine’s survey of ‘The 50 Biggest Mafia Bosses’ (Fredric Dannen, Vanity Fair, “The Born-Again Don”, February 1991).”

But, Michael’s life is stranger than fiction because he succeeded in doing something no other mafia member had ever done before. He quit.

After years of living a life filled with money, power, and jail time, Michael Franzese walked away from it all.

Why would a man who seemed to hold control give it all up?

That’s what his updated biography, Blood Covenant, explains to readers in detail. Here’s a spoiler: he put his faith in the blood of Jesus Christ rather than the blood oath of his crime family.

Read ahead to get a glimpse into this powerful memoir.

We hope you will purchase a copy of this book to read on your own. It is unlike any other book you will read and one which a summary cannot do justice.

Plus, you’re invited to join us at South Bay Bible Church on Saturday, October 12 and Sunday, October 13 to hear Michael Franzese speak live.

It’s going to be powerful! Invite your friends and family who love a good redemption story, as well as those who get a thrill from edgy real-life mafia stories.

The Sins of the Father

In Blood Covenant, Michael does not hide where he comes from and how he became tied to the mafia.

He goes into great detail explaining what the family was like. He details his father’s (Sonny) important role as mob enforcer and underboss for the Colombo crime family, which was one of the five powerful La Cosa Nostra crime families in the New York City area.

Readers quickly learn how Michael grew up believing Sonny Franzese was not his biological father and the only one of Sonny’s kids who “didn’t have Sonny Franzese’s blood running through [his] veins (p. 48).”

As a result, Michael endeavored for his father’s attention and acceptance, eventually becoming his only child who followed in his criminal footsteps.

It was his father’s experiences with law enforcement and the FBI that forever changed the way young Michael determined who was good and who was evil.

Eventually, Michael dedicated years to helping his father stay out of prison and then years trying to get him released from prison.

A Life of His Own

While his father Sonny was in prison the first time, Michael’s life took a quick turn.

Rather than continuing in college to pursue medicine at Hofstra University, he decided to find a “quicker route to success (p. 85)” – the mob.

His year-long “pledge” period culminated with his formal induction into the Colombo crime family on Halloween in 1975.

The induction required a blood oath (thumb prick) proving allegiance to La Cosa Nostra. Part of the oath included that if he ever broke the oath, “[his] blood would be shed (p. 127).”

Michael’s financial success, based on less than scrupulous means, quickly picked up steam.

It was at this point he was made a captain in the Colombo crime family.

However, his massive amount of money and his ties to organized crime caught the attention of federal law enforcement.

As he explains, “This massive, fourteen-agency government task force had one assignment – to bring me down (170).”

Meeting the Love of His Life

Still being watched but living large, Michael entered the movie business and headed to Miami for film production.

In a bit of an ironic turn, Michael was lauded by the people of Miami and even given a key to the city by the mayor of Miami. At the same time federal agents were building a huge case against him.

In another twist, this was the time when Cammy captured Michael’s attention. Cammy turned out to be the love of his life and the person who introduced him to Jesus Christ.

When they met, Michael was married. Michael and his wife divorced, but the legal problems (loan shark operations, racketeering, etc.) could no longer be hidden.

However, as Michael writes, “[Cammy] believed that God had sent her to me for my salvation, and she was not about to let anything stand in the way of our future. So, from that moment on, my former life, to her, simply would not exist. Everything that came before was of no consequence because everything was new (p. 199).”

Proving her love for Michael and her faith in their relationship, Cammy stayed by his side throughout his trial and married him soon after it ended.

Putting His Faith in Jesus Christ

After their wedding in Vegas, Michael and Cammy planned a church wedding where they received premarital counseling. It was at a counseling session where Michael “was ready to become a real Christian (p. 254).” Michael explains:

“As I drove home that day, I couldn’t help comparing what I had just done with the other oath I had taken, with the other time I had been ‘born again.’ That oath had been shrouded in ceremony […], and now my minister was telling me that my name had just been written into the Book of Life and that I would live forever in heaven because of a simple prayer I said in his office. He said that it didn’t matter what I had done in the past or how much money I’d stolen (p. 258).”

Grace After a Fall

Even though he had given his life to Christ, Michael was still dealing with the consequences of his ties to the mob.

After being charged with hefty white-collar crimes, Michael was eventually found guilty and given a long prison sentence.

Through it all, Cammy stayed by his side. Her acceptance and love for him made the decision easier to “give up my criminal empire and go to jail, and even attempt the impossible – sever my ties to La Cosa Nostra (p. 296).”

So, in addition to his plea bargain, Michael privately promised to quit organized crime knowing it would most likely be a death sentence.

Moving forward in faith, Michael was publicly baptized in 1989 after his serving  three years in prison.

However, like many other Christians, Michael struggled with giving God control of his life and fell into some of his old ways.

He writes, “I would continue to work things out myself […]. I not only failed, I failed miserably. And it landed me right back in prison, where God went to work on me again (p. 348).”

His public fall from grace actually strengthened his faith as he pleaded for forgiveness and drew closer to God.

Michael says, “Prison had been good for me, and I was a much better man for it. I had come through it as a much more dedicated and serious believer. This former Mafia captain had really become a soldier in the army of the Lord Jesus (p. 370).”

While in prison, Michael realized, “When it came to being a leader, I realized that Jesus was the antithesis of the men who ran the mob. We wanted to flex our muscles, show our strength, and be respected by all, while Jesus wanted only to be loved. We wanted to be served, while Jesus made it clear He came to serve and not to be served (p. 362).”

God began providing ways for Michael to serve him even in prison.

He appeared in anti-gambling campaigns aimed at professional sports. This type of speaking continued upon his release from prison and continues today.

Michael escaped organized crime, became a Christian, and leads many others to do the same.

He uses every part of his life, whether it is spending time with professional athletes, coaching little league ball, or acting in films, to glorify the Lord.

And, the Mafia hasn’t killed him yet.

Exciting news! Our blog has been selected as one of the Top 60 Pastor Blogs on the web! You can check out the link here: