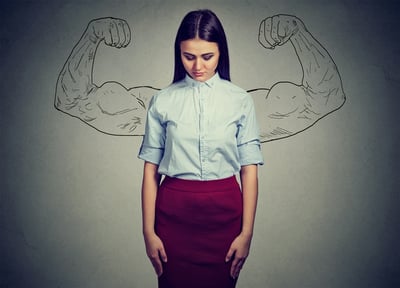 If you were to describe weakness, what adjectives would you use? These days, it seems meekness invokes a vision of someone who has a quiet voice, who allows people to walk all over him, and never stands up for what is right.

Movies portray characters, even heroes, who are selfish, wimpy, and unwise. Cowards are honored. Weakness is worn like a badge.

The Bible encourages meekness and “turning the other cheek.” Does this mean God encourages cowardice, weakness, and allowing others to take advantage of you?

It would be good to look at some examples of meekness before you decide.

Let’s start with the story of WWII medic Desmond Doss. He was the first conscientious objector to win the Medal of Honor. Doss was raised in Lynchburg, Virginia. His father was a carpenter, who suffered from severe depression and drunkenness. His mother was a devout believer and was known to be very kind. She took her children to church regularly (Berman, 2016).

Doss grew up with a large poster of the Ten Commandments in his house that he greatly treasured. A photo depicting Cain taking his brother Abel’s life captivated him. He was quoted saying the photo disturbed him as he pondered how a brother could do such a thing. It made an impact on Doss as he pictured the contrast between Cain taking his brother’s life and Christ giving His life.

When Doss was a young boy, his father and uncle were drinking and got into an argument. Doss’ father pulled a gun on his uncle and threatened to kill him. Doss believes that his father would have killed his uncle that night, but his mother stepped in and stopped the fight. She had her young son hide the gun.

The influence of the Ten Commandments photo and the altercation between his dad and uncle sunk deeply into Doss’ heart and mind. As he was hiding the pistol from his father that day, he decided it would be the last time he’d ever touched a gun (Roberts, 2016).

Doss later signed up to be a medic in the Army thinking he would have the opportunity to save lives. He never realized he would be asked to bear arms and even use them under certain circumstances. Immediately upon being assigned a division, he let it be known that he would not carry a gun, nor would he work on Saturdays as he was a devout Seventh Day Adventist. He said the only weapons he needed were his Bible and his faith in God (HistoryvsHollywood.com, 2016).

Doss’ stance on bearing arms and working on Saturdays brought on severe persecution from his fellow soldiers and superiors. He was even told by a fellow soldier, "Doss, as soon as we get into combat, I'll make sure you won't come back alive." Several attempts were made to get him discharged, but he was able to stay actively listed as a conscientious objector. This meant he could remain in the Army and serve as a medic without bearing arms of any sort. Doss withstood the persecution and never backed down from his convictions (Desmond Doss: The Real Story, n.d.).

In 1945, Doss and his division were involved in the Battle of Okinawa. It lasted for almost two months. As if Doss’ strength of character isn’t described powerfully enough to this point, Doss showed his true courage during this intense battle.

The Battle of Okinawa was raging when Doss found himself in the middle of it. His division was given the command to climb a steep ravine; unfortunately, thousands of Japanese soldiers laid in wait for them once they reached the top. An immediate retreat was ordered by the officers, and one-third tried to start back down the steep climb. The rest were either killed or wounded, but Doss would not allow them to lie there helplessly. Doss, determined to save lives, braved the ruthless enemy, relentless gunfire, and lowered 75 men off the cliff to the safety of medics waiting below (HistoryvsHollywood.com, 2016).

“While under constant fire on Okinawa, army medic Desmond Doss single-handedly rescued 75 wounded troops and lowered them down a cliff face to safety. Making his feat even more impressive is that he did it without carrying a gun to defend himself (A&E Television Networks, LLC, 2018).”

In an interview late in his life, Desmond Doss stated the one thing he remembers most about the battle was simply that he prayed continually after each rescue, “Lord, please help me get one more (Blair E. , 2016).”

John McArthur describes meekness as “Power under control.” That certainly describes Doss. After reading his story, there is no way to consider him weak either in mind or spirit, nor could one argue that he simply stood back and allowed anyone to take advantage of him or his division.

John McArthur goes on to say, “Don't equate gentleness with cowardice, lack of conviction, or mere human niceness. It's a virtue that draws courage, strength, conviction, and a good disposition from God, not from self-centered human resources (MacArthur, 2018).”

Coming back to the modern day, meekness can still be described as strength, not weakness. On October 2, 2006, a deranged man entered an Amish elementary school in Pennsylvania and opened fire killing five young girls before taking his own life.

The Amish community pulled together and worked through their grief with determination not only to forgive the killer but also to be a blessing to his family. Many in the Amish community attended the gunman’s funeral service to comfort his family in their time of need.

Funds came pouring in from the community and from the world. The victims’ families chose to divert the funds to the wife and children of the gunman even though some faced staggering medical bills of their own (Shapiro, 2007).

The Amish community members freely admit forgiveness has not come easy. It is a day-to-day battle but one to which they are committed. They state that giving to the family of their children’s killer helps fight bitterness and keeps the perspective on God, not themselves (Walters, 2016).

Finally, Christian singer/songwriter Matthew West recently wrote and recorded a song about forgiveness after hearing a story that touched him deeply. The story is of Renee Napier, her daughter Meagan, and Eric Smallridge. West describes Renee as a woman who did the impossible.

Renee Napier is the mother of four children, two of whom are twins. May 11, 2002, started out as an ordinary Saturday. Renee’s 20-year-old daughter Meagan and her friend Lisa Jo Dickson had a day at the beach planned. I can imagine the laughter as they reflected on a perfect day playing in the surf and sand. The laughter was jarred to a stop when a drunk driver suddenly struck their car.

Renee lost her daughter Meagan in an instant.

Renee’s life went from planning warm-weather barbecues to attending funerals and court sessions, from summer’s carefree freedom to hanging on the news of a prison sentence.

Renee watched her daughter’s killer as he fell apart during the court proceedings. He apologized and cried. His life had held promise just like Meagan’s. He was a recent college graduate. His future had been as bright as Meagan’s until the fateful night.

Eric Smallridge has a very close family, a college education, and now an inmate number as his identity.

Renee found herself on a mission she said she would never have chosen. She started a non-profit and began traveling the United States telling children about the dangers of drinking and driving. After several years, she started to feel as though something was missing from the presentation. She felt something just wasn’t right.

Though her daughter’s killer was serving a jail sentence for his crime, Renee felt she was the one in prison. Her bitterness, anger, and hatred were more than she could bear, so she cried out to the Lord for help. Through prayer, she was able to untangle the dense weeds of bitterness and angst. She came to understand how much she needed to forgive Eric, which she had never done.

After intense prayer and time spent begging God for direction, Renee was finally ready. She reached out to Eric and said: “I forgive you.”

When Napier was asked how she managed to forgive him, she replied, “I didn't, I came to the end, and I asked God to take me the rest of the way (Rowell, n.d.).”

When Eric talks about it, he says his life was changed because she came to him. He said, “I can’t even forgive myself, yet she forgave me.” Through Renee’s forgiveness, Eric came to know the Lord and was saved.

Several in Renee’s family reached out to Eric and embraced her example. They offered their forgiveness, and Eric is now considered a part of the family. Today, Renee refers to him as her son.

Renee and eleven family members went to the court and spoke on Eric’s behalf. Through their testimony, they got Eric’s sentence cut in half, from 22 years to 11.

The once incomplete story is now complete. Today, Eric joins Renee on tour teaching about the dangers of drunk driving and the infinite power of forgiveness.

These three stories, though very different, each put the subject at a crossroads. Each person or family could have chosen vengeance, unforgiveness, bitterness, and anger, and they would have been perfectly justified in doing so. However, in each case, they chose the more difficult path – a path ultimately leading to God working powerfully through each situation.

If meekness equals weakness, then it makes sense to ask ourselves the following questions:

These questions obviously make no sense. Clearly, meekness is in no way weak but is clearly strong, bold, and just plain hard. It is also obvious that the meek shall inherit the earth (Matthew 5:5).

To take this just one step further, meekness is not often honored as a worthwhile character trait and is even the butt of many jokes. However, when all is said and done, what kind of person do you want to be?

Imagine Desmond Doss’ options. He certainly could have carried a weapon. He could have worked on Saturday. He could have climbed the ravine, fought alongside his fellow soldiers, and died alongside them. Another option could have been a discharge out of the military, but he knew God was leading his every decision. He looked to the Lord for strength, and Doss held firm to his convictions.

Imagine getting the phone call about a shooting in your daughter’s school. Imagine receiving the news about your daughter being one of the mortally wounded victims. Bitterness and anger come naturally in this type of situation. They are accepted and expected among society. What about the hard road of forgiveness? Bitterness would alienate the innocent wife and child of the killer. Bitterness would hold you prisoner, but forgiveness sets people free.

Finally, imagine it was your daughter who was killed by the drunk driver. Here is the hard question. Could you forgive the young man who killed your daughter and show him the love and loyalty of a family by accepting him as a son in your house?

MacArthur, J. (2018). Restoring the Value of Meekness. Retrieved June 08, 2018, from Grace to You: https://www.oneplace.com/ministries/grace-to-you/read/articles/restoring-the-virtue-of-meekness-11247.html

Walters, J. (2016, October 2). The Happening: 10 Years After the Amish Shooting. Retrieved June 12, 2018, from The Guardian: https://www.theguardian.com/us-news/2016/oct/02/amish-shooting-10-year-anniversary-pennsylvania-the-happening