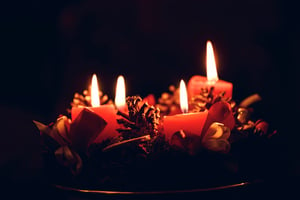 It seems we anticipate Christmas earlier and earlier every year.

Some stores set up Christmas displays during the summer! Pretty soon, they will be up all year around.

We can argue about the right time to start playing Christmas carols (October for me), but for Christian churches, the season of Advent begins the fourth Sunday prior to Christmas Day.

Unlike commercial Christmas anticipation, the season of Advent is a symbolic, special time of spiritual preparation to remember the birth of Jesus Christ on Christmas as well as anticipating His future coming.

In many churches, an Advent wreath and candles are lit each Sunday of the season. Generally, each week focuses on a different theme.

For this blog series, we will move through the four popular themes of hope, love, joy, and peace.

Today, we are talking about hope at Christmas.

The Theme of Hope on This First Sunday of Advent

On the first Sunday of Advent, some churches light one of the candles on the Advent wreath known as the prophecy candle.

Whether or not your church uses this model, it is a good way to begin to understand the idea of Advent.

Advent comes from the Latin word adventus, which means “coming.”

Throughout the Old Testament, prophets spoke about the coming of a Messiah.

Imagine a world without a savior. Think about living in a time when you had only the hope that one day a savior would come!

As we enter the season of Advent, reflect on the hope of the Savior arriving to our desperate, broken world.

The Prophets Were Hopeful

In the Book of Acts, it is written, “But this is how God fulfilled what he had foretold through all the prophets, saying that his Messiah would suffer (Acts 3:18).”

However, the Old Testament prophets not only predicted Jesus would suffer, but they also predicted His birth, His family line, His birthplace, and His virgin birth (Micah 5:2; Isaiah 7:14).

“For to us a child is born, to us a son is given, and the government will be on his shoulders. And he will be called Wonderful Counselor, Mighty God, Everlasting Father, Prince of Peace. Of the greatness of his government and peace there will be no end. He will reign on David’s throne and over his kingdom, establishing and upholding it with justice and righteousness from that time on and forever.”
– Isaiah 9:6-7

As Walter C. Kaiser, Jr. explains, “The prophecies about the Messiah were not a bunch of scattered predictions randomly placed throughout the Old Testament, but they form a unified promise-plan of God, where each promise is interrelated and connected into a grand series comprising one continuous plan of God.”

The prophets eagerly anticipated the coming of the Messiah.

Jesus is the Hope of the World

We get to live in the world after the prophecies were fulfilled. We get to experience the hope they foretold! How amazing!

Advent is a tremendous reminder of the before and after.

It’s hard for many of us to imagine a world without a Savior, but the prophets lived in the before. We live in the after when “He appeared and the soul felt its worth.”

As we reflect on the hope Jesus brought on the first Christmas day, take a few moments to read the lyrics of the popular Christmas hymn “O Holy Night.”

“O holy night, the stars are brightly shining.
It is the night of our dear Savior's birth.
Long lay the world. in sin and error pining.
Till He appeared, and the soul felt its worth.
A thrill of hope the weary world rejoices …”

Jesus is the thrill of hope the weary world needed – and still needs!

When you celebrate His birthday, praise His continued presence in your life and the hope He gives the world.

Our Future Hope in His Second Coming

Moreover, since Advent is a season of anticipation, it is also gives meaning to His second coming.

For those who have placed their faith in Christ, this world is not your home. We eagerly anticipate the day our Savior will return and take us to be with Him.

Advent provides an opportunity to reflect on the prophets who waited years and many never lived to see His arrival but remained hopeful.

May the same be said of us.

Ways to Continue Celebrating Advent Beyond this Blog

We hope this Advent season draws you closer to your Heavenly Father as you anticipate the arrival of Jesus’ birthday.

In addition to reading these blogs, here are a few more suggestions to use advent as a time to prepare your heart (and your family) for the coming of Christ.

As quoted in Baptist Press, “The Advent season can be a great time for families to celebrate Jesus Christ afresh. Parents are wise to create opportunities for children to focus on Jesus amid all the holiday rush."