Considering Divorce: Before You Say "I Don't" 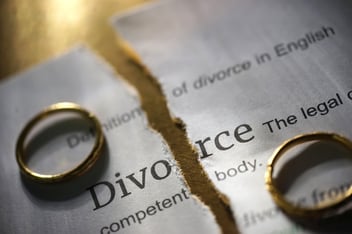 Considering Divorce: Before You Say "I Don't"

According to the National Marriage and Divorce Rate Trends, there are 2,015,603 marriages in the United States. Sadly, approximately 50% of these marriages will end in divorce.


What was once seen as a taboo is becoming normal in society.

Our kids go to school and half of their classmates come from broken homes.

This isn’t what God wants for our marriages and families.

And it isn’t what we want when we say our vows in front of friends and family. We say, “I do,” not even thinking we’ll ever want to say, “I don’t.”

The truth is that marriage is hard. The reason is simple. You married a sinner, and you are a sinner.

Unfortunately, it’s become acceptable for people to get divorced these days for reasons that aren’t biblically acceptable. For instance, “It’s hard” isn’t exactly grounds for divorce.


For those of you who are struggling in your marriage, we don’t want to shame you. We want to give you hope and show you there is a pathway away from “I don’t” back to “I do.”


To help us with this challenging topic, we will be using Lou Priolo’s booklet Divorce: Before You Say “I Don’t.”

What is Unbiblical Divorce?

“For I hate divorce!” says the Lord, the God of Israel. “To divorce your wife is to overwhelm her with cruelty,” says the Lord of Heaven’s Armies. “So guard your heart; do not be unfaithful to your wife.” – Malachi 2:16

Let’s not beat around the bush. God hates divorce.

God sees marriage as a lifelong commitment. Divorce was never part of His plan.

However, the Bible does make an exception for sexual immortality.


But I say to you that everyone who divorces his wife, except on the ground of sexual immorality, makes her commit adultery, and whoever marries a divorced woman commits adultery. – Matthew 5:32

Priolo explains, “Nothing short of marital infidelity or desertion by an unbelieving spouse constitutes a biblical (i.e., non-sinful) divorce.”

In other words, all the other reasons people commonly use for divorce are sinful.


[Related Read: Top 20 Most Frequently Asked Bible Questions: What Does the Bible Say About Divorce and Remarriage?]

Unbiblical Divorce is a Sin and Reveals a Hardened Heart

In some people’s rationalization of divorce, they point to divorce in Old Testament times.

However, this is often misinterpreted.

He said to them, “Because of your hardness of heart Moses allowed you to divorce your wives, but from the beginning it was not so.” – Matthew 19:8

In this passage of scripture, Jesus is explaining to the people that divorce was only allowed because the people were only sinning by hardening their hearts.

Divorce is evidence that someone has hardened their heart not only to their spouse but also to God.

The Consequences of Unbiblical Divorce

During a difficult time in your marriage, it is easy to only focus on the here and now.

You may start to convince yourself that “the grass is greener on the other side.”

But before you say, “I don’t,” take time to consider the following consequences of unbiblical divorce.

• Brings shame to the name of Christ.  As a Christian, you are a living example of God’s handiwork. When you initiate an unbiblical divorce, you tell the world God couldn’t help you save your marriage. In contrast, those who chose to stay and fight for their marriages have an opportunity to glorify God with their story of reconciliation and changed hearts.

• Subjected to God’s discipline. Unbiblical divorce is a sin, which means it is subjected to natural (and supernatural) consequences. You shouldn’t expect to walk away from a marriage without a biblical reason and expect things to be fine.

• Multiplies misery by the guilt and bitterness experienced. Often, people neglect to realize that divorce brings misery. They only think they aren’t happy with their spouse, so they believe they will be happier without them. In most cases, the opposite is true. They live their lives filled with guilt for leaving their marriage and consumed by bitterness over the hurts they can’t forgive.

• Causes hurt and harm to others. If you are initiating an unbiblical divorce, you need to consider how this is hurting the other people in your life. Divorce has a ripple effect. It immediately affects your spouse, but it ripples out to your kids, other family members, and friends. Priolo writes, “The person you are thinking of abandoning will be wounded in all sorts of ways.” Moreover, the person you are leaving is a beloved child of God. As Gary Chapman writes, “Every day you leave your ex-wife in less than cherishing circumstances is a day you have reneged on your vows and newly offend not just your Heavenly Father, but your Heavenly Father in Law.”

The Common Reasons for Unbiblical Divorce

Here are some of the more common reasons people use to justify leaving a spouse.

• My feelings have changed. We tend to put too much emphasis on our feelings. The truth is you are responsible for your feelings. Priolo writes, “You created those romantic feelings, and by God’s grace, you can make them come back.”

• I’m no longer happy. Here’s the truth. There will be days when you are happier than others, but this isn’t an excuse for divorce. Moreover, you shouldn’t be depending on your spouse to make you happy.


• I’ve changed. My spouse has changed. When you said your marriage vows, you said, “For better or worse, in sickness and in health,” and you meant them. You will both change throughout your marriage. That doesn’t mean divorce is the answer.


• It’ll be better for the kids. Many people believe it will be healthier for their children if they divorce. Is that really the case? Have you actually talked to your kids about the possibility of divorce?


• It’s hard and I’m tired of fighting. Marriage is hard and there are times when you will need to fight for it. But it’s worth it. God is doing a work in you and your spouse. Priolo says, “God may be using the trials in your marriage to chastise you and sanctify you for your own good and for His glory.”


How to Turn Your Marriage Around

Reconciliation is at the heart of the gospel. God sent his Son to die on the cross so we would be forgiven for our sins and reconciled in our relationship with him. Our marriages can be a living example to those around us of forgiveness and reconciliation. Don’t give up on it yet.

Invest in your marriage.


Go back to the beginning and do the things you did when you were dating. Fall back in love.

[Related Read: How to Divorce-Proof Your Marriage]

Gary Chapman writes, “[Divorce is] like chemotherapy: I hate that anyone has to undergo such drastic treatment, but I thank God for the lives chemotherapy has lengthened. It would be the height of cruelty, however, to give chemotherapy to someone who didn’t have cancer and who didn’t need it. Divorce is just like that: terrible, but sometimes necessary, and outright reprehensible if used when not needed.”

While unbiblical divorce is sinful, it is important to note that people trapped in dangerous domestic abuse situations should take steps toward safety. If you are in an abusive relationship, please seek help from those experienced with domestic abuse. South Bay Bible Church can help connect you with resources, safe homes, and counseling services.