Celebrating Our Independence in Christ 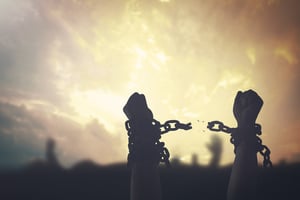 Whether your family will be going out to watch a spectacular fireworks show or simply enjoying a backyard barbecue this 4th of July, you are in the ranks of countless other Americans celebrating our country’s independence.

When the Declaration of Independence was approved by Congress on July 4, 1776, America became “the land of the free.” We still enjoy that freedom today because of the sacrifices of brave men and women.

For Jesus followers, freedom comes from being a disciple of Christ. As you will see, the word “freedom” takes on new meaning for believers. Let’s look at Scripture to help you make your own Declaration of Independence in Christ.

They were Slaves but Didn’t Know It

Most are familiar with Moses leading the Israelites out of slavery in Egypt. “Let my people go” is well known to most. The Israelites’ slavery fulfilled what the God told Abraham in Genesis 15 about his descendants. Because of Abraham’s righteousness, God promised him a great number of descendants (Genesis 15:6). Following their 400-year captivity, Abraham’s descendants would be set free (Genesis 15:13-16).

Today, this type of slavery is clear and easy to explain. They were held captive and kept in bondage. This also explains why the Jews in the first century were confused when Jesus declared “the truth will set you free” (John 8:31). Let’s look at the exchange.

To the Jews who had believed him, Jesus said, “If you hold to my teaching, you are really my disciples. Then you will know the truth, and the truth will set you free.” They answered him, “We are Abraham’s descendants and have never been slaves of anyone. How can you say that we shall be set free?” Jesus replied, “Very truly I tell you, everyone who sins is a slave to sin. Now a slave has no permanent place in the family, but a son belongs to it forever. So if the Son sets you free, you will be free indeed.
– John 8:31-36

The Jews believed they had already been freed from slavery as Abraham’s descendants. They were no longer working and living as slaves, so what was Jesus saying? To use Billy Graham’s terms, they were living in “spiritual slavery,” and the only way to be free is through Christ.

What is Spiritual Slavery?

If you think spiritual slavery only affected the Jewish people, you are mistaken. Like the Jews in this passage, many do not realize we are living in bondage and slaves to sin. Whenever we look for freedom or independence outside of Christ, we fall into sin.

As Mike Pohlman explains, “Even as Christians we can fall prey to the temptation to trust in other things for our freedom from the tyranny of sin: status, money, good works, associations, etc. But the true disciple finds freedom in Christ and Christ alone.”

Christians are Free from Sin

Thankfully, slavery is not the end of our story. As Christians, we experience freedom from sin and death.

“Therefore, there is now no condemnation for those who are in Christ Jesus, because through Christ Jesus the law of the Spirit who gives life has set you free from the law of sin and death.”
– Romans 8:1-2

When Jesus Christ died on the cross, He took our sin with Him. We are no longer held captive by sin. If we are a disciple of Christ, we are under his authority.

Paul explains in Romans 6:14, “For sin shall no longer be your master, because you are not under the law, but under grace.”

A Freedom We Can Celebrate for Eternity

Likewise, while the wages of sin is death, our freedom in Christ means we do not have to fear death. We will spend eternity with him because our citizenship is in Heaven.

“Since the children have flesh and blood, he too shared in their humanity so that by his death he might break the power of him who holds the power of death—that is, the devil— and free those who all their lives were held in slavery by their fear of death.”
– Hebrews 2:14-15

While we celebrate America’s Independence Day only one day a year, we get to celebrate our freedom in Christ every day for eternity!

Freedom in Christ is Not an Excuse to Sin

Our freedom in Christ is not a “get out of jail free” card. Instead, we should view our freedom as a unique expression allowing us to love God and others – not an excuse to sin. Paul writes in Galatians 5:13, “You, my brothers and sisters, were called to be free. But do not use your freedom to indulge the flesh; rather, serve one another humbly in love.”

As you celebrate America’s Independence Day, take time to reflect on your independence in Christ and look for opportunities to share this freedom with others. As you spend time enjoying the national holiday, spend time thanking God for the freedom he gave you. Find ways to express your love for God while serving others this Independence Day. Help others see how they can be free from whatever sins hold them captive.

If you are not a Jesus follower, this is a fantastic day to become one. CLICK HERE for more information on a relationship with Jesus.

“The Spirit of the Sovereign Lord is on me, because the Lord has anointed me to proclaim good news to the poor. He has sent me to bind up the brokenhearted, to proclaim freedom for the captives and release from darkness for the prisoners”
– Isaiah 61:1