Book Recommendation: The Hole In Our Gospel by Richard Stearns 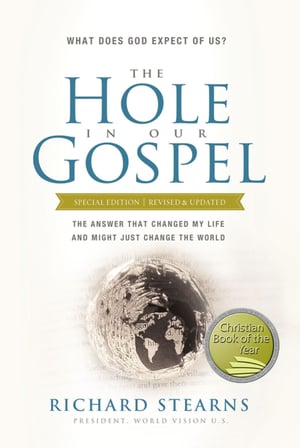 Every now and then, you come across a book that changes you. A book that reaches deep into your heart and shakes you up. A book that stays with you long after you read the final page.

The Hole in Our Gospel: What Does God Expect of Us? The Answer That Changed My Life and Might Just Change the World by Richard Stearns is one such life-changing book.

The Hole in Our Gospel is a story of one man who, in the world’s eyes, had it all but, in time, had his eyes opened to a much bigger life.

Trusting God, Richard Stearns walked away from his prestigious and lucrative career to serve as president of World Vision, where he saw first-hand the gospel in action.

His story can also be your story, especially as it relates to Jesus followers.

Stearns humbly tells his personal story. He admits his own fears and misgivings while inviting readers to learn from his experiences.

He shares openly about what he has seen and learned as president of World Vision, and he gently but resolutely explains why this is not only his calling but all of our callings.

If we call ourselves Christians, we are all called to be the good news.

“When we committed ourselves to following Christ, we also committed to living our lives in such a way that a watching world would catch a glimpse of God’s character – his love, justice, and mercy – through our words, actions, and behavior […] He called us to go out, to proclaim the good news – to be the good news – and to change the world (Stearns, Introduction).”

In addition to telling his story, Stearns uses Scripture to remind readers that this is not just a push from the president of World Vision but a command from our heavenly father.

The Hole in Our Gospel is designed to resonate with readers and leave a lasting picture in our minds, which is why it also includes personal photos and infographics with relevant statistics.

Below is a summary of the main truths from the book The Hole in Our Gospel, but I highly recommend readers purchase a copy of the actual book and read it in its entirety to glean more understanding.

Who is Richard Stearns?

The author of The Hole in Our Gospel is the president of World Vision, Richard Stearns. Since this is his story, Stearns provides the reader with his personal background.

He grew up in an average, middle-class home without much money, which may explain why he strove for the American Dream and hesitated when approached by World Vision.

Stearns attended an Ivy League school and went on to work for Parker Brothers, where he quickly climbed the ladder and became a very successful corporate executive. Eventually, he moved on to become the CEO of Lenox.

Most importantly, Stearns shares his salvation story with readers.

After being deeply skeptical of religion, he eventually became a devout Christian after thoughtful consideration and much research.

Shortly after becoming a Christian, Stearns married Renee. He and his wife were actively involved in their church and supported missions.

From an outsiders’ perspective, Stearns lived a lavish lifestyle and was seen by many as a poster boy for Christian success.

But, in 1998, Stearns received a call from God to give it all up and take over as president for the global humanitarian organization World Vision, which he emphatically resisted.

Upon becoming president of this organization, Stearns was exposed to poverty and world needs beyond comprehension.

He also began to see a huge missing component in the American Christian community, “something fundamental has been missing in our understanding of the gospel (Stearns, from the Introduction).”

What is the Hole in Our Gospel?

Stearns shares a story from his friend Jim Wallis who did an experiment to show what the Bible would look like if every verse referring to poverty, wealth, justice, and oppression were cut out.

“When Jim would speak on these issues, he would hold his ragged book in the air and proclaim, ‘Brothers and sisters, this is our American Bible; it is full of holes. Each one of us might as well take our Bibles, a pair of scissors, and begin cutting out all the scriptures we pay no attention to, all the biblical texts we just ignore (Stearns 11).’”

The hole in our gospel, according to Stearns, is a “limited view of the kingdom of God.” It has “reduced the gospel” so that Christianity has become merely about checking off our salvation.

Unfortunately, the faith versus works debate led many into a trap of believing they don’t have to “do” anything as long as they have faith that Jesus is the Son of God.

However, as James, the brother of Jesus says, “Do not merely listen to the word, and so deceive yourselves. Do what it says (James 1:22).”

Stearns' call to action is for Christians to understand that being a follower of Jesus means following his example and taking action.

“Our charge is to both proclaim and embody the gospel so that others can see, hear, and feel God’s love in tangible ways (Stearns 6).”

When we ignore Jesus’ commands to take care of those in need, we are not doing what the Bible says.

This is where organizations like World Vision come in.

World Vision is an evangelical Christian humanitarian aid, development, and advocacy organization striving to do what Jesus commanded us to do.

They feed the hungry, take care of the poor, and fight injustice, and they do it well!

When Does the Kingdom of Heaven Begin?

Often, when Christians talk about “the Kingdom of Heaven,” they speak about a future eternity with God in Heaven.

But, Stearns argues the Kingdom of God is here, now, where the “least of these (Matthew 25:40)” are lifted up. The Kingdom started when Jesus came to Earth.

“His was not intended to be a far-off and distant kingdom to be experienced only in the afterlife; no, Christ’s proclamation of the kingdom of heaven was a call for the redeemed world order populated by redeemed people – now (Stearns 4).”

As redeemed people, we are called to bring light into the darkness here on Earth. How do we do so? By feeding the hungry, taking care of the poor, caring for the widows and the orphans, and fighting injustice.

“This is a vision of God’s people transforming God’s world in God’s way. There is no hole in this gospel. This is what Jesus meant when he prayed, ‘Thy will be done in earth, as it is in heaven (Matthew 6:10).’ Charity, equity, and mercy are marks of the kingdom of the Messiah, and Christ wanted it to begin on earth (Stearns 45).”

Where are Our Neighbors?

Considering the whole gospel (the one without a hole) and the kingdom of heaven, here are what Stearns declares the three greatest commandments:

We see this same question in the parable of the Good Samaritan, a story of a man of a despised race helping a critically injured man, who ethnically and politically he probably did not agree with or even like very much, but he loved and helped him anyway.

In the past, it was much harder to help our long-distance neighbors, that is no longer the case.

We can no longer “get away with” claiming our neighbors are only those with whom we come in contact regularly in our neighborhoods.

“If we are aware of the suffering of our distant neighbors – and we are – if we have access to these neighbors, either personally or through aid organizations and charities – and we do – and if we have the ability to make a difference through programs and technologies that work – which is also the case – then we should no more turn our backs on these neighbors of ours than the priest and the Levite should have walked by the bleeding man (Stearns 89-90).”

Likewise, Stearns acknowledges how much easier it is to be compassionate towards those you connect with personally.

However, we must remember these aren’t just “somebody else’s kid;” these are children of God.

This is the reason Stearns calls us to continually pray for God to soften our hearts so we may see those who are not our own the way He sees them.

Why Does the Whole Gospel Change Everything?

When Christians begin following and living out the whole gospel, radical things occur.

We become the hands and feet of Jesus to the least of those living in “the broken places, the hurting places, and the ragged edges of our world (Stearns 266)” – and people take notice, which glorifies our Father in Heaven.

“That love, when demonstrated to the world through acts of kindness, compassion, and justice is revolutionary; and when we become agents of it, we make credible the message of a Savior who transforms men and women for eternity (Stearns 57).”

Stearns points out the reason the early church grew so rapidly was because of how the early Christians took care of “the least of these.”

Christians were known for their love in action and their willingness to help those in need.

Imagine what would happen to the world if all the churches started living out the whole gospel in this way? Can anyone say revival?

How to Bring the Good News Even When You Feel Overwhelmed

Stearns also recognizes how many of us, especially those who are involved in their churches, suffer from “compassion fatigue.”

We are inundated with news about atrocities around the world 24/7.

Unfortunately, having this much awareness is having the opposite effect when it comes to raising funds.

“We have become detached and indifferent toward the constant and repeated images of poverty and adversity that bombard us (Stearns 88).”

The large amount of information and statistics coming at us actually cause us to “depersonalize a large group of people [and] respond to them with far less compassion (Stearns 102).”

We excuse it, we ignore, and sometimes, we even condone it.

But, Stearns presses his case and provides keen insight into some of the deadliest and dire situations around the world.

He notes that this could lead Christians to feel overwhelmed rather than moved to action. However, he quotes Bob Pierce, who said, “Don’t fail to do something just because you can’t do everything (Stearns 135).”

However, Stearns argues that while every individual can do something, churches need to do more.

“If the Christian community is truly to be salt and light in a dark world, we will only succeed by embracing the whole gospel. Faith and works must be put back together again (Stearns 184).”

Additionally, we need to recognize our money is not our own. It comes from God. As such, we should be faithful with the money entrusted to us.

But, everyone’s heard that in at least one sermon.

Here’s what you may not have heard before:

“You’re rich, we’re rich, and the Church in America is rich […] We don’t believe we are wealthy, so we don’t see it as our responsibility to help the poor. We are deceived (Stearns 198-199).”

To make it a little clearer: “If every American churchgoer tithed, we could literally change the world (Stearns 201).”

Stearns suggests, “We will have to make some ‘on purpose’ life choices and then change our priorities and behavior. Only then can God transform us and use us to change the world (Stearns227).”

Pray, love, serve, give, and care. That’s how it begins.