The Apostle's Creed- God the Son 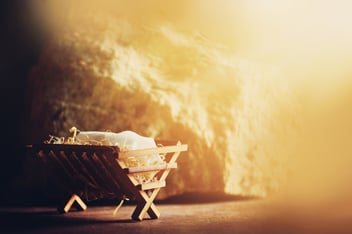 The Apostle’s Creed – God the Son

I am excited to continue our series on The Apostle’s Creed. In the last blog, we covered the first section, which focuses on God Our Father. Today, we are moving to the next section, which begins speaking of what Christians believe about Jesus Christ.

To simplify it, the second section, “and in Jesus Christ, His only Son, our Lord: Who was conceived by the Holy Spirit, born of the virgin Mary” is the heart of the Christmas story.

There are people who believe Jesus Christ was human and walked this earth, but they don’t believe he was fully human and fully God, nor do they believe he was born of a virgin. However, for Christians, these beliefs are central to their faith.

By breaking these lines apart, you can see why.

Jesus Christ, His Only Son

We believe “in Jesus Christ, His only Son.” This belief follows the section outlining Christian’s beliefs about God the Father. This line is a reference to John 3:16, and many other Bible verses which state Jesus Christ is the Son of God.

It is also important to recognize that the creed emphasizes Jesus Christ is God’s only son. When Christians speak of God the Father, they recognize God as their Creator and themselves as adopted sons and daughters. That said, Christians are not one part human mother and another part God the Father. Only Jesus Christ has the distinction of being fully human and fully God.

Moreover, when Christians claim Jesus Christ as “our Lord,” we are simultaneously declaring our allegiance to Him. Enduring Word explains, “at a later time in the Roman Empire, all residents of the Empire were required to swear an oath of allegiance to the Emperor, declaring that ‘Caesar is Lord,’ and had to burn a pinch of incense to an image of the emperor. Though the Roman government saw this only as a display of political allegiance, Christians rightly interpreted it as idolatry - and refused to participate, often paying with their lives. For them, there was only one Lord.”

Conceived by the Holy Spirit

The next line states that Christians believe Jesus Christ “was conceived by the Holy Spirit.” This is a hard concept for believers and non-believers. As adults, we understand the birds and the bees – or how babies are conceived.

Whereas conception requires a father and mother, Jesus Christ was not conceived by a human or earthly father. This is miraculous and requires Christians to believe in only what God can do. This statement “points to the divine operation of God, the Holy Spirit, in bringing Jesus Christ into this world.”

Even Mary was unsure of how this would happen. She asks the angel, and in Luke 1:35 the angel tells Mary, “The Holy Spirit will come upon you and the power of the Most High will overshadow you and for that reason, the Holy child shall be called the Son of God.”

Joseph also required an explanation, and in Matthew 1:20 the angel tells Joseph, “For the child who has been conceived in her is of the Holy Spirit.”

As Dr. Ligon Duncan explains, “When we say ‘conceived by the Holy Spirit’ we are emphasizing the divine operation of the Holy Spirit in bringing Jesus Christ into this world.”

Born of the Virgin Mary

Following conception by the Holy Spirit, Christians believe Jesus Christ was “born of the virgin Mary.” This is essential to Christianity for many reasons. First, it shows belief that Jesus was born as a baby, which makes Jesus human. Second, because Jesus was born of a virgin, it reiterates the divine operation of God. Third, this was the fulfillment of Old Testament prophecy.

All this took place to fulfill what the Lord had said through the prophet: “The virgin will conceive and give birth to a son, and they will call him Immanuel” (which means “God with us”). – Matthew 1:22-23

Many people who aren’t Christians don’t believe this portion of the creed. It seems too miraculous for Jesus to be conceived by the Holy Spirit and born of a virgin. However, this is the point. No other birth in the history of the world occurred like this one. It was a miracle. But it was a miracle that directly fulfilled the prophecies from Isaiah 7:14, prophecies which were laid out long before Jesus about the coming Messiah who would save the people. If Jesus had not fulfilled that prophecy, then He was not the Christ, and we are stuck in our sins. So then, belief in this miracle is essential to Christianity.

The Importance of Incarnation

This portion of The Apostle’s Creed introduces Christian’s belief in incarnation. Incarnation is the belief that Jesus, the Son of God, took on human flesh, making him fully human and fully God. In these lines, Christians express belief that Jesus was born as a man to a virgin woman and lived life on Earth.

We Are Faith explains, “Jesus is like other humans in that he goes through the life cycle that we all do; he does not appear out of heaven as an adult who comes to teach and heal, but grows up like everyone else.”

Joan Osbourne begged the question in her major hit single of 1995, asking, “What if God was one of us?” Here’s some encouraging, good news for you today. He was. And that’s exactly what we needed in Jesus Christ – a Great High Priest who could identify with sinners (Hebrews 4:14-16). Not only did He know our weakness, but He felt our weakness. And in His death, resurrection, and ascension to the Father, Christ has given us freedom from the sin that bore us down and hope to strengthen us in the days ahead.

But more on that next week…