The Apostle's Creed- God Our Father 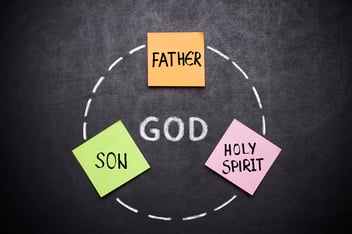 The Apostle’s Creed – God Our Father

Have you ever attempted to explain Christianity to someone who knows nothing about it?

Since Jesus gave his followers to the great commission “to go and make disciples of all nations, baptizing them in the name of the Father and of the Son and of the Holy Spirit, and teaching them to obey everything I have commanded you” (Matthew 28:19), Christians have been trying to do just this.

Over 1800 years ago, around 140 A.D., early believers found a way to succinctly summarize the basic and essential beliefs of Christianity. It became known as The Apostle’s Creed. While the Apostles in the Bible did not write it, it did develop what the Apostles believed, taught, and ultimately died for.

It doesn’t matter if you recite The Apostle’s Creed in church every Sunday or have never heard of it – it is helpful for understanding the defining beliefs of Christianity and identifying what you believe as a Christian. And if you aren’t a Christian, it is a great introduction into what Christians believe and what sets Christianity apart from other world religions.

Here’s The Apostle’s Creed in full.

was crucified, dead, and buried;

On the third day He rose again from the dead;

He ascended into heaven,

and sits at the right hand of God the Father;

from which He will come to judge the living and the dead.

We believe in the Holy Spirit;

the communion of saints;

the forgiveness of sins;

the resurrection of the body;

and the life everlasting.

While it is short summation, it is packed full of the theology and doctrine. That’s why we are breaking it down into sections over the next few weeks. Today we are starting with the first lines.

“We believe in God, the Father Almighty, The Maker of Heaven and Earth…”

“We believe in God, the Father”

Christians believe that God is a loving Father. God the Father is the first revealed person of the Holy Trinity. He’s called the Father for a few reasons: He’s the head of the Trinity, He’s a Father to His Son (Jesus), and He’s a loving Father to those who are adopted as children when they believe.

Enduring Word explains, “God has a fatherly care and concern for us. For many, there is great power and healing in understanding what a wonderful and loving Father God is. Even if you weren’t as blessed as I was to have a great father, you know instinctively how a loving father should care for his children. If you don’t know it by experience, you know by instinct what a great father should be.”

As our perfect Father, God takes care of us, protecting and providing for His children. He also listens to us and acts on our behalf. He is present to us at any moment we might need Him.

According to Got Questions, “When we see God as the Almighty, we are struck by His power and by the fact that He is indeed a great, mighty, and awesome God (Deuteronomy 10:17). The identity of God as Almighty serves to establish the sense of awe and wonder we have toward Him and the realization that He is God above all things without limitation.”

Christians believe that God can do all things. There’s nothing bigger, greater, or stronger than Him. This encourages us, because we know that there’s no need that He can’t accomplish.

The Apostle’s Creed adds the belief that God, the Father Almighty is “the maker of Heaven and Earth.”

Here is when we are introduced to Christian’s beliefs about creation. Christians believe God created heaven and earth and everything in it – including us.

To flip this around, this also means that Christians do not believe anything happens by chance. Sandy Finlayson says, “The universe didn’t come into being by random chance, but by the word of God’s power. We are living in a day when many people try to rule God out of creation, and the creed reminds us that this is not an option for us.”

Therefore, the first section of The Apostle’s Creed has already declared God as the One True God, who is our Father and the maker of everything that exists. And while He is a God that transcends all His creation, He is not distant from His creation. He has not left us to our own devices. He is close to us and involved.

Next week, we will move into the next section, which begins to summarize what Christians believe about Jesus Christ.