Anger and the Bible Part 1 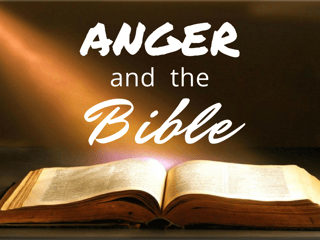 Anger is very powerful emotion. It can create havoc and bring about much pain in people’s lives. However, it is not always sinful to be angry, and the Bible has much to say about anger. This blog will touch on some of it.

For instance, God Himself is “angry at the wicked every day (Psalm 7:11).” Jesus was angry as noted in Mark 3:5, “He [Jesus] looked around at them with anger grieved at their hardness of heart…”

Jones notes that the most common word for “anger” in the Old Testament [Hebrew aph] denotes human anger 47 times, and at least 42 times, eighty-nine percent of those times, indicates sinful anger (Jones, 2005, pp. 28-29).

As Jeremiah 17:9 tells us, “The heart is deceitful above all things, and desperately wicked.” Scriptures warns, “Put off your old self, which is being corrupted by its deceitful desires (Ephesians 4:22).”

Most often people get angry for selfish reasons. Most of the time, we get angry when people rub us the wrong way, don’t please us, don’t give us what we want, or prevent us from getting something we want, “What causes quarrels and what causes fights among you? Is it not this, that your passions are at war within you? (James 4:1-2).”

We need be careful even in evaluating our anger because our hearts are deceitful and usually our anger is a result of things we want or don’t want to lose. Therefore, we easily deceive ourselves into thinking that our anger is righteous when it is not.

All anger must be handled in a timely and godly manner.

Ephesians 4:26 says, “Be angry, but do not sin; do not let the sun go down on your anger and do not give the devil an opportunity.”

Anger in and of itself is not sin. The exhortation from Scripture is “…but do not sin,” which will happen if anger is not dealt with properly and allowed to churn in our hearts and minds.

However, even righteous anger can become sinful. It can turn into bitterness, resentment, self-pity, and self-righteousness.  If anger is not dealt with biblically, it may become a bitter root in our hearts, which is liable to give the devil an opportunity to make us seek revenge or act in some other sinful way.

Righteous or unrighteous anger that is not dealt with expediently and properly can fester like an open sore and become an infected mess.

Anger must be expressed in godly ways.

Anger is often dealt with one or two ways: Clam up, or blow up.

There are two common ways people deal with anger. Both are ungodly.

Clamming Up or Internalization

Clamming up or internalizing anger will not deal with the problem but only let it fester. It will increase the likelihood of emotions like bitterness, self-pity, and resentment. The person who internalizes his anger directs emotion against his own body, which can cause him to become irritable, sullen, tense, miserable. Clamming up hurts relationships with others. (Adams, 1970).

Ventilation or Blowing Up

Ventilation is thoroughly unbiblical. It harms and ruins relationships. In addition, it can do physical harm to the angry person and those in the way of their anger. (Adams, 1970).

So how do we control and deal with anger in a more biblical and effective manner? We will cover this in the following post.