Guarding Against the Spirit of Apathy 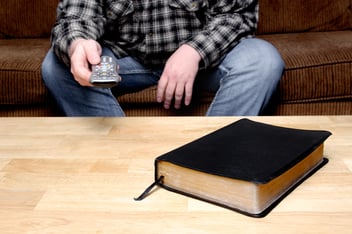 Guarding Against the Spirit of Apathy

Have you ever felt “stuck?”

When I say, “stuck,” I don’t mean when you are unable to move into the next season of life due to external obstacles. I’m talking about being “stuck” because there’s a restlessness, lack of desire, or a lack of motivation within you which keeps you from pursuing better wants or needs.

Has that been you? Might that be you right now?

Maybe you’ve lost your drive at work, so you aren’t getting tasks done in a timely fashion. Perhaps you’re becoming detached at home, so you’ve stopped having date night with your wife and making time to toss the football with your son.

There are so many parts of our life where you and I can get “stuck.” It’s not that you don’t know what you’re supposed to do, or that you think it’s wrong for anyone to have any expectations of you at work, home, etc. You just can’t pull yourself together to fix your attention, play your part, and do what you need to do.

We’ve all been there at some point, me included. I hope this blog will help you in some way.

This restlessness, lack of desire, and lack of motivation that we’re discussing is, what most people would call, apathy.

Apathy should not be confused with laziness. Laziness is an intentional unwillingness to perform. Apathy feels more like there is a weight which pulls you back from your endeavors.

In other words, it’s not that you have feelings of hate toward something and, therefore, resist it. It’s that you don’t have any feelings around it at all.

But Sayers uses an interesting word – sin. Is apathy a sin?

The relationship between apathy and sin has been long debated. Believe it or not, apathy was praised and seen as somewhat virtuous for a long time.

It was the central idea of the Greek philosophers and Stoics who sought to live without passions and violent emotions. They promoted apathy as a form of self-sufficiency and equanimity. Brilliant thinkers like Aristotle believed the good life was with the apathetic.

Even the early Christian thinkers had a high view of apathy. They applied the concept to God, calling it his “impassibility.” Certainly, God has emotions, however; this was another way of describing the unchangeableness and steadfastness of God, meaning he is not swayed or affected by sudden selfish desires or the circumstances of the world we live in.

Of course, that attribute of God was something that was then desired for God’s people. They promoted apathy as a virtue which causes us to see everything we have/don’t have and everything that happens/doesn’t happen to us as realities to accept with grace and means by which we can grow deeper into the love of God. This was the principle behind St. Ignatius of Loyola’s philosophy of “Holy Indifference.”

However, apathy is no longer about a resistance against passions for the sake of contentment and love. Apathy, as we experience it today, is more rooted in lethargy and unenthusiasm which ultimately threatens our ability to love anything or anyone.

For that reason, I tend to understand apathy to not be “sin” in and of itself, but something which can lead us into sin. In fact, the overwhelming apathy of our day seems to be a demonic attack of some kind to keep us complacent and indifferent toward the things in our lives which matter most.

While our lack of motivation at work is saddening, and our detachment at home is unsettling, I find the greatest threat we face is the overwhelming apathy which slips into our relationship with the Lord. This is based off the assumption that you believe in and have some kind of history with God to begin with.

When we are released from the bondage of apathy which is brought onto our affections for the Lord, then our home and work life will somehow work itself out. Furthermore, you may be able to use some of the principles below.

Apathy and the Christian Believer

I’m certain you’ve either been there, will be there, or are there right now in your walk with Jesus. I certainly have been, even recently.

By “there,” I mean, you know God, you believe his truth, you recognize your need for him, but you struggle to come into his presence. You’ve lost the motivation to study his word. You’ve lost the hunger for prayer.

You don’t hate any of it. You wouldn’t reject it. You just can’t bring yourself to connect with God in that way.

You feel like the church at Sardis, going through the motions and faking it until you make it, but you know you’re really dying (Revelation 3:1-6). Maybe you feel like Jesus is saying to you what he said to the disciples in the Garden of Gethsemane, “The Spirit is willing but the flesh is weak” (Mark 14:38).

This is what the Spirit says to you in the words of the Apostle Paul:

Do not be slothful in zeal, be fervent in spirit, serve the Lord.

We have to do everything in our power to fight off this evil spirit of apathy.

Apathy is a bondage which will slowly lead to discouragement, sin, and a complete distaste for the things of God. It begins within us and then manifests itself in our attitude toward others. It causes us to get caught up in frivolous matters instead of the practices which bring healing and freedom, such as prayer, stillness, scripture reading, service, etc.

We can be tempted to believe that because everything is consistent and status quo, that it’s all good, but what may look like consistency is actually complacency. Unfortunately, that complacency could be dragging you down.

How do we fight against our overwhelming apathy so that we can rediscover the fullness of joy and peace?