Fake News: Exposing God For Who He Isn't 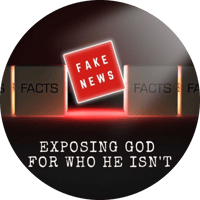 Fake News: Exposing God For Who He Isn't

The knockoff is rarely as good as the real thing. When it comes to how you perceive God, that statement becomes even more true. South Bay Bible Church, 578 Montauk Highway, East Moriches, is pleased to announce the start of Fake News: Exposing God For Who He Isn’t on Sunday, January 22, at 9:00 and 11:00 a.m. Join us in person or online at southbaychurchli.org/livestream, Facebook Live, or YouTube.

“Real joy, real hope, and real peace require the real God,” said Matt Horne, lead pastor. “In order to discover who God really is, we first have to clear our minds of the false versions we’ve created.”

Whether you consider yourself a church person or not, you’re invited to join us for this four-part series, Fake News, as Pastor Matt explains why the counterfeits can’t help us.

About South Bay Bible Church: South Bay Bible Church is a non-denominational Christian church known for Biblical messages applicable to everyday life. The church is located at 578 Montauk Highway in East Moriches, NY. The church’s mission is to lead people into a growing relationship with Jesus Christ. Our service schedule includes Sunday morning at 9:00 & 11:00 AM, and online anytime. A nursery and children’s church are available. For more information, go to www.southbaychurchli.org, call (631) 909-8241, Facebook, or Twitter @sbbcli.